Gen Con 2014 Aidan demoed a copy of Memoir ’44 at the Days of Wonder booth after I was unable to snag a copy of Five Tribes on the first day. He loved the game but didn’t get a copy until his his birthday a few months later. 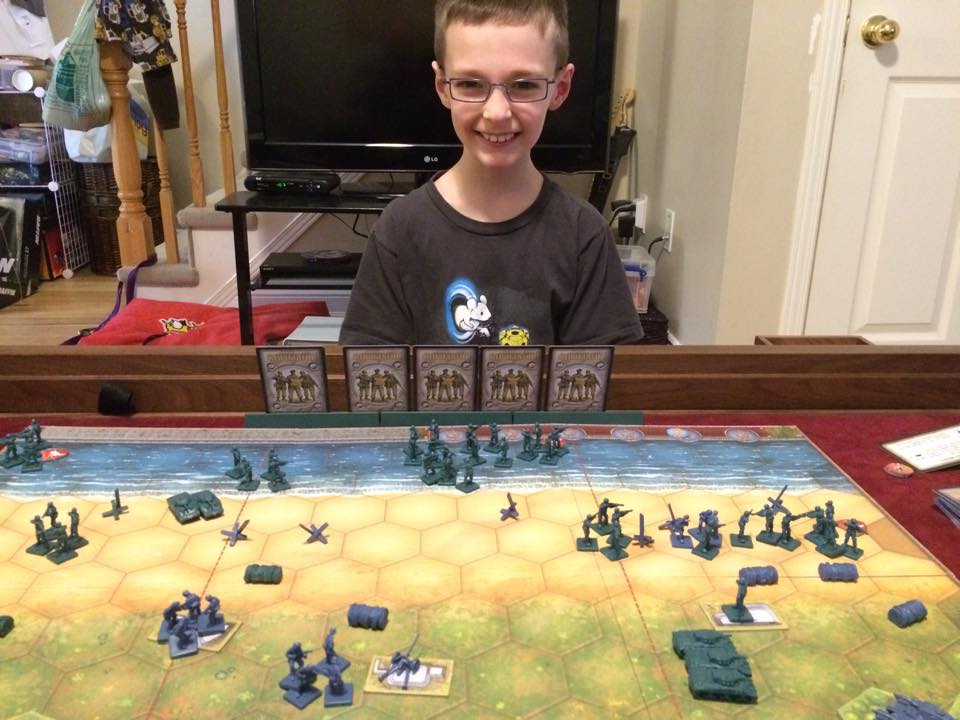 We’ve played through a few of the missions and plan on returning the game soon, everyone who I’ve played it with has enjoyed it a lot because it has simple dice and card system yet had a lot of depth not to mention you learned a little bit of history with each play.

The card mechanic in Memoir ’44 is straightforward with most cards that tell you how many models you can move and on what side of the board (left, middle, right, or all) and special cards that will give some sort of benefit to your troops. On your turn you’ll play a card and do what it says.

To do any combat in the game you will role custom 6 sided dice and you look for symbols required that will eliminate the other sides units. Each unit type has its own requirements, thankfully the game comes with handy reference cards to help the players out. Also the closer your model is to the target model the more dice you get to chuck, lowering the luck component.

The box for Memoir ’44 comes with a set of missions (you can buy expansions which include more units, cards and missions) which are the jewel to this game. They walk you through various actual battles that happened during the late war of WWII. So not only are you playing a fun easy two player game, but you’re learning something along the way. The detail in each battle is very high which adds to the theme and overall enjoyment of the game.

I learned only the other day while listening to the Ludology Podcast interview Memoir ’44 designer Richard Borg that Memoir ’44 is but one game (a very popular one) in a series of games that all use the system he calls ‘Command & Colors’ The series ranged from games that take place during historical events like the Napoleonic War to fantasy with BattleLore. This has me all excited to try these other games out and see how different each game feels different yet still using this unique but simple system. Knowing Ms. Meeple’s love for history I think they’ll see a lot of play and we’ll learn something along the way.

No Thank You, Evil - The Playtest